Home » Tapestry: a fresh look at the art of the Middle Ages

Tapestry: a fresh look at the art of the Middle Ages

As far back as in ancient times complex and expensive wall carpets in production focused on wealth and status of their owner. Tapestry, or to be more precise, trellises, could only be afforded by wealthy people: merchants, professors of prestigious universities or higher ministers of the church.

Today, however, the tapestry is much cheaper than some paintings by contemporary artists, but at the same time it continues to be the prerogative of true connoisseurs of art and those who have an original approach to choosing details for the interior. One can safely say that works created in the tapestry technique are new paintings, as well as a fresh look at traditional art.

Tapestry is one of the most prestigious and expensive types of decorative and applied technique, which was called “art for kings”. The first trellises appeared in Ancient Greece. Woven carpet, otherwise tapestry, was created by hand from wool and silk. Often masters added gold or silver threads to the product.

The word “tapestry” itself began to be used in the second half of the XVII century, when brothers Jean and Filiber Tapestry opened a manufactory in Paris, which produced trellises. They were used everywhere in the interior, to decorate the streets on holidays or hang from balconies. Trellises can be seen in Leonardo da Vinci’s painting “Last Supper”: they are hanging behind the backs of Christ and his disciples.

Woven carpet was called differently in different countries. In Europe, for example, the word “tapisseries” is more commonly used. Externally, they are almost no different from tapestry, except that such textile panels usually depict fantastic animals, as the Byzantine fabrics, dated IX-X centuries, do.

Once, the English artist of the XIX century, William Morris decided to revive the art of medieval tapestry. According to its prototype, he created a whole series of trellises called “The Worship of the Magi”. In 1902, a Russian collector Sergei Shchukin purchased one Morris copy, which nowadays can be seen in the collection of the State Hermitage Museum in St. Petersburg. 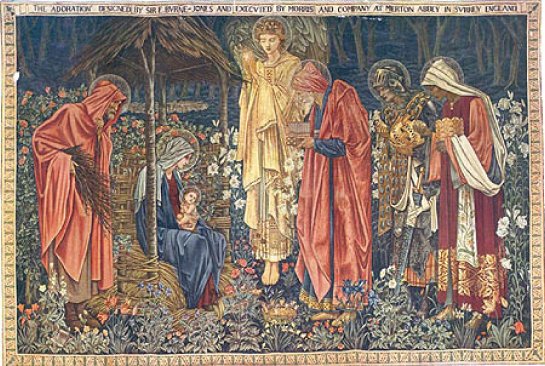 A trellis "Worship of the Magi". England, Merton Abbey, 1902

Even in ancient times, the walls of cathedrals, palaces, castles and town halls were decorated with silk and woolen trellises. In contrast to painting, tapestries immediately give the interior coziness and originality. Often they are chosen for rooms where there is a lack of textiles, or when designers resort to a combination of cold and warm textures. For example, tapestries look organic on natural concrete walls or walls with brickwork in loft-style interiors. 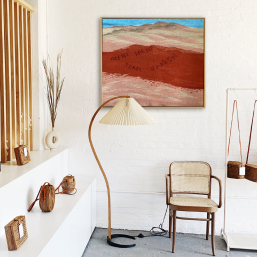 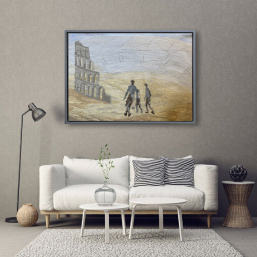 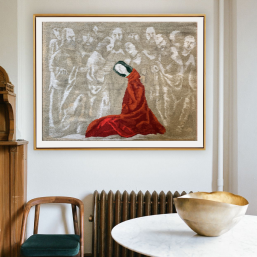 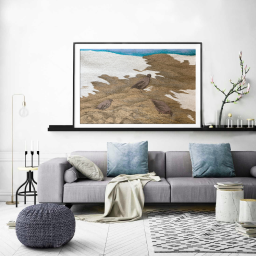 In general tapestry is a universal and profitable way to decorate space. It is willingly used in classic and modern interiors, especially in contemporary ones, in which woven panels can serve as a highlight of the whole house. As a connecting link, tapestry brings together different styles of the objects in the room. Red or green accents on the carpet picture organically resonate with curtains or pillows of the same shades. Often tapestry is also used to visually increase the space. For this purpose, choose canvases with landscapes of a remote horizon line.

Tapestries by the artist Alexei Bandura are a great find for collectors. He has been working in this relatively rare technique for over 40 years. The artist creates his works from wool, linen and silk, using hand weaving, applications and burning. There are no patterns or decorative embroidery familiar to these textiles: the artist uses fabric as a canvas painter does. Alexey Bandura creates canvases based on artistic traditions of the art of the Scythians, ancient Slavs, Greeks and other peoples. These works are included in the series “The Gold of the Scythians” and “Unrealized Travels”. Among them are the paintings of 2006 “Scythian Pectoral” and “Scythian Gold”, as well as later paintings “Trojan Horse” and “Cain and Abel”.

Using soft pastel tones for the background and a bright large spot with small compositional elements as an accent, Bandura’s work is reminiscent of the 1986 film “Kin-za-za!” by Soviet director Georgy Danelia. Like the characters in the film, Uncle Vova and the Violinist, the characters in Alexei Bandura’s tapestry also find themselves alone in the middle of a huge sandy desert, like in the works in the style of symbolism “The First”, “Children’s Games” and “Return”.

Tapestry of Bandura is also reflects on the theme of beauty, philosophy, issues of interaction between East and West, male and female origins. Such works include “Farewell to Socrates”, “The Eternal Theme”, “Dream” and many others.

The small Motherland of the artist – Ukraine – also serves as an inspiration for creating tapestries. Dedications to the native nature can be found in the following landscapes: “Ukraine. Winter 2014” in the style of abstractionism or in one of the paintings of 2020 “Our Crimea”. 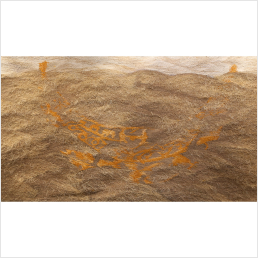 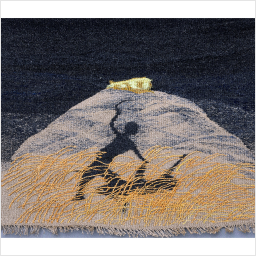 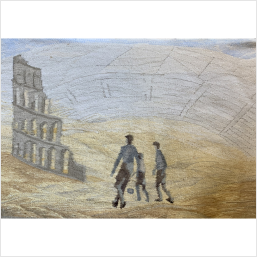 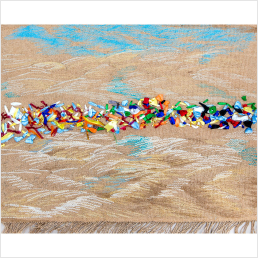 Alexey Bandura was born in 1952 in Odessa region. He received his art education at the College of Applied Arts named after Vasily Shkrilyak in the Carpathian city of Vizhnitsa, and almost 30 years later – at the Faculty of Interior and Environmental Design at the Kyiv Institute of Design and Modeling named after Salvador Dali. In the late 1970s, Bandura moved to Samara. He actively participated in various city expositions and fairs and also demonstrated his works at All-Union and All-Russia exhibitions in Cheboksary and Moscow. Among them – international textile biennale, which took place in Jurmala, Lviv, Kiev and Krakow. In total, the artist held 20 solo exhibitions in Russia and Ukraine. Today many of his paintings are in museums of Russia and other countries, and every year there are several exhibitions abroad. The artist himself lives and continues to work in Samara.