Ilya Tabenkin and His Invented Language

Why is Ilya Tabenkin a revolutionary artist, a phenomenon of a special order in the visual arts? First of all, because there are new meanings in his work at different levels of perception. It is like the cultural layers of an ancient civilization: some of them are already clear to us, while others have yet to be discovered, unraveled and admired.

But first, let’s remember how any art is born. For the most part, if this is not the art of the unconscious, the work is created by the author twice: first, it appears in the head as an emotion, an idea or as a project, and only then is embodied on canvas or other material, with optional preparatory steps in the form of sketches. In mathematical terms, 99% of all painting is the art of the first derivative.

We will continue to apply our mathematical approach, but now to the art of Ilya Tabenkin, or rather to his still lifes of the 70-80s. We can safely say that the artist’s famous paintings of still life arrangements are already the art of the second derivative! And here’s why. Before creating a painting, Tabenkin makes small sculptures from fireclay, papier-mâché or plasticine, then arranges these figures and draperies in a special way, modeling his unique world, and only then paints a still life.

Attempts to use the second derivative have been made before in the visual arts. For example, Van Gogh and Matisse used images of their other works in their paintings of interiors. But for Tabenkin, the second derivative is not so much a creative tool, and not even a preparatory step in the form of a sketch, as a conscious transformation of the still life. At the beginning, as a sculptor, he needs to tactilely feel the plasticity of the figures being created, then model a spatial composition with draperies, and only then move on to the role of a painter: create color and updated forms on the canvas.

And in this context, Tabenkin’s figurines are not just “preparatory sketches” for easel work, they are much more – they are a whole language that the artist invents for his world of still lifes. Moreover, this language exists as a harmonious system. The figures appear before us as some kind of pictograms, symbols, hieroglyphs of a new language.

So far, we can only figure out only a part of this language: these are birds as symbols of music, and humans in dramatic poses as character archetypes, these are antique columns and amphorae as symbols of architecture and household items. But many other interesting figurines-pictograms remain unsolved. In fact, the artist invented his own language, in much the same way as the famous J. R. R. Tolkien invented the elvish language for his world. 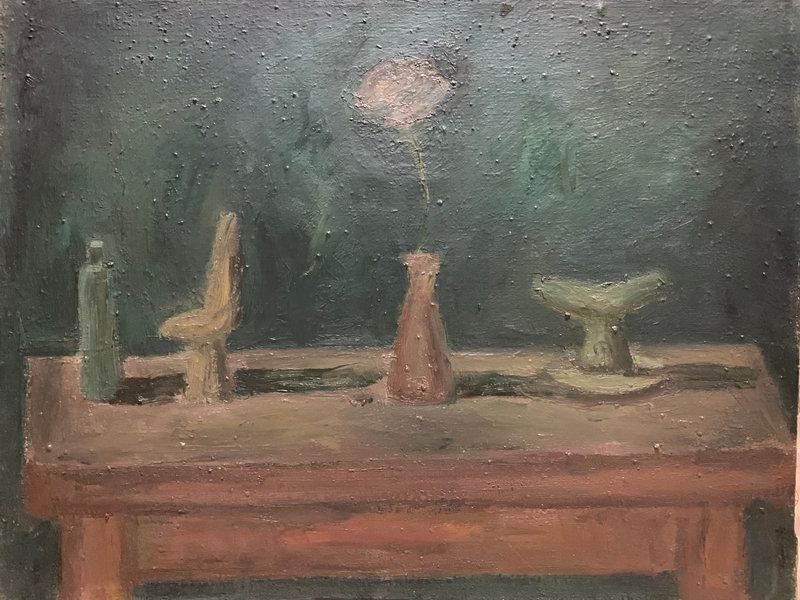 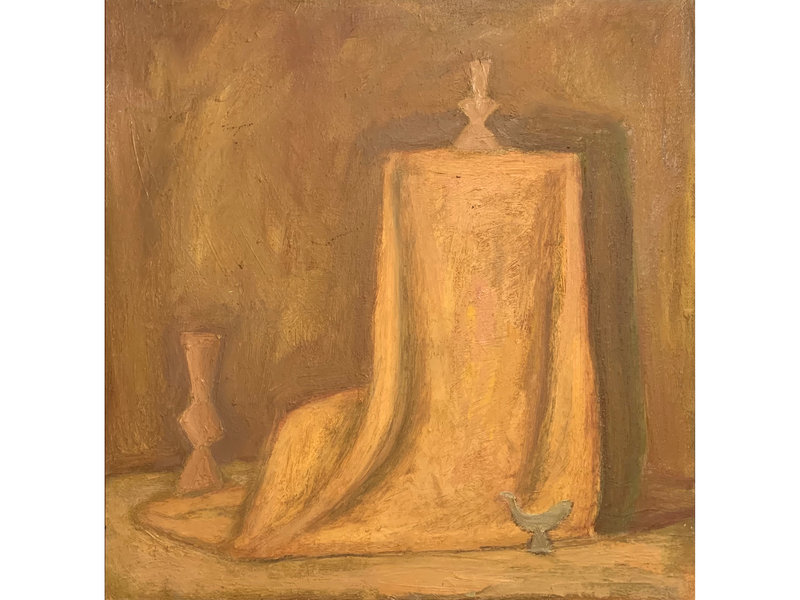 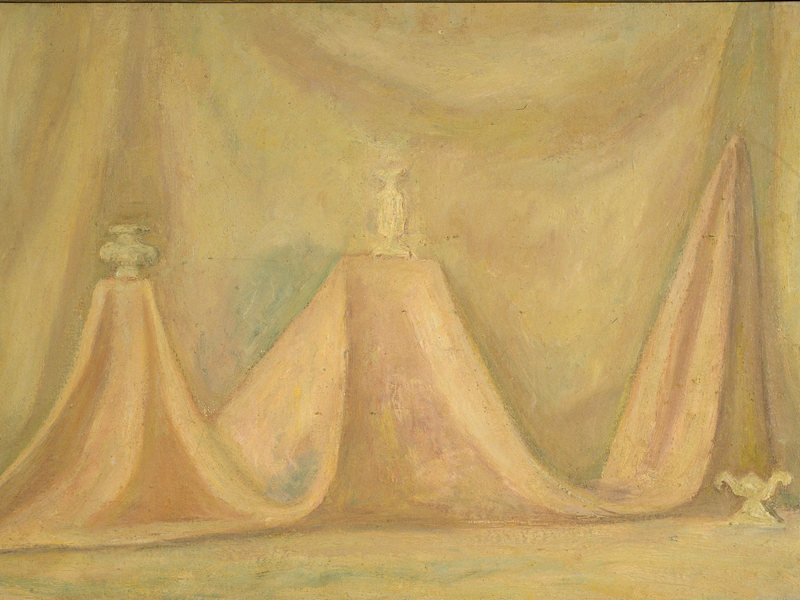 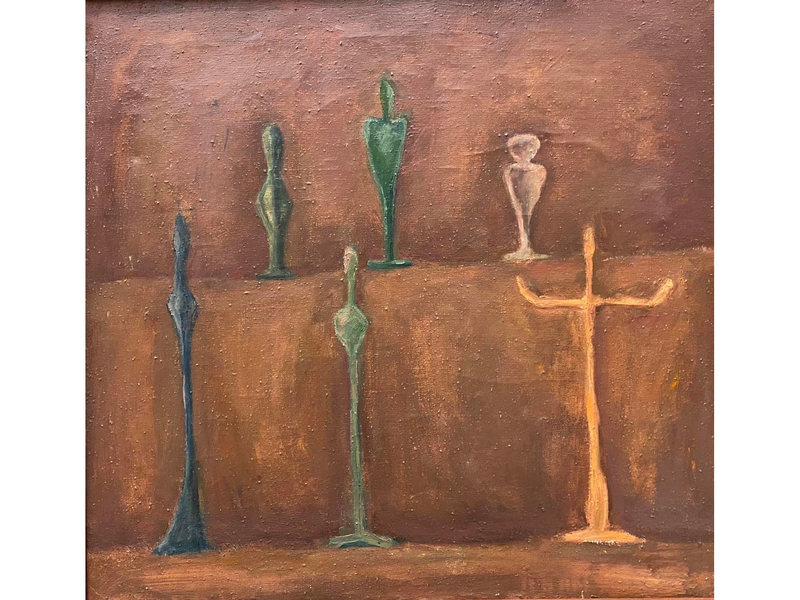 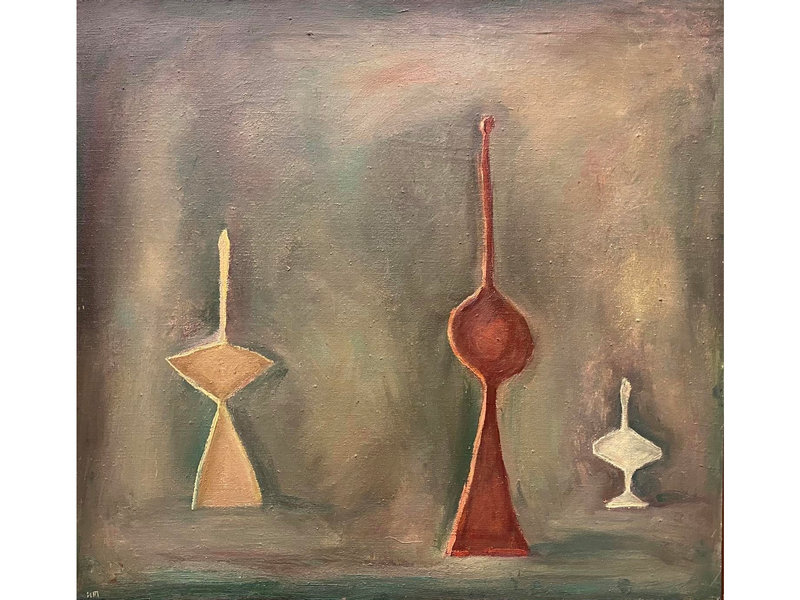 But if for Tolkien his worlds are a literary space for new fairy tales and epics, still lifes by Ilya Tabenkin are, above all, a space for new theatrical and musical performances executed in painting. The table turns into the stage, draperies into the backdrop, and figures into actors, music and even the audience themselves! But in order to finally perform the play, stage lighting is needed, and we also see it in Tabenkin’s still lifes. In a production, light is always complex, using filters, intensity and composition. It is dramatic, and lives on its own inside the stage.

It is interesting that the artist combines whole series of his paintings into one space, as in a large dramatic production or even an opera, where in one picture we see rows of emotionally reacting spectators, in other paintings – scenes from different acts of the play. By arranging Tabenkin’s paintings in different ways – in an exhibition space or any other interior – we can thereby not only reproduce the performance itself, but also direct the sequence of acts or the narrative.

In his later works in the 1980s, Ilya Tabenkin often leaves figurative art typical of his 60s and 70s works. The plot of the paintings is becoming more and more minimalistic. The artist’s landscapes are dominated by simple lines; facades of houses with flat tree shapes remain – without streets, cars or other surroundings.

In still lifes too, the artist is gradually moving away from modeling stage performances. The images and symbols of the figures now exist, as it were, out of context – there is no table or other support, often there are not even draperies themselves. What remains is a deep background with a complex dark color, almost like in writing with ancient Egyptian hieroglyphs. The shapes of the figures are the quintessence of the artist’s unique language.

Tabenkin’s paintings, like a good book, can be “re-read” over and over again, and each time you discover deep ideas in them. And this is an integral part of modern contemporary art, in which the new language of still lifes by Ilya Lvovich Tabenkin plays a special role.