Home » A man doesn’t need much… At the very end of spring, the wonderful artist Misha Pivovarov was gone

A man doesn’t need much… At the very end of spring, the wonderful artist Misha Pivovarov was gone

At the very end of spring there was no great artist Misha Pivovarov.

On the first day of summer we said goodbye to him… The short life of a man who could be read as an open book by his paintings written in this spring-summer flavor ended.

A man doesn’t need much:

Silence after the thunder.

A blue piece of mist. 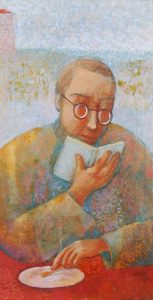 Pivovarov was often called Misha, very childishly, and he in fact was so – big, kind, light, very vulnerable, as it turned out, with a low threshold of sensitivity to the difficult twists and turns of life.

He had no artistic education, he graduated from Kazan University, Faculty of Chemistry, but he had to be born with a subtle and sensitive soul to inevitably start expressing himself through creativity and become an artist and poet.

He was born in 1971 in Bulgaria. In the early 1990s, he started painting (he attributed this passion to the influence of Kazan artists with a special poetic world – Oleg Ivanov, Tatiana Larson and others) and quickly became known and recognizable. Since 2007, he has also been passionate about animation, working on the animation project “Lullabies of the World” in Moscow and the studio “Tatarmultfilm”. He produced animations for collective exhibitions “Fly № 2007”, “Blow”, “Unnecessary Details”.

One of the last exhibitions for Mikhail was the group exhibition “Beware of Children” at the Museum of Modern Art of St. Petersburg XX – XXI centuries in summer 2018, where he was invited from the Institute itself.

The artist’s works are in the State Museum of Fine Arts of the Republic of Tatarstan, State Historical, Architectural and Art Museum-Reserves “Kazan Kremlin” and “Sviyazhsk Island-City”, in the art gallery Zelenodolsk, in private collections in Russia, USA, Canada, Greece, Germany and the Netherlands.

Mikhail was quite well known outside Kazan. When he was still alive he received recognition, he was talked about as a creator of not local “spill” at all, he was loved by “our” people living on different continents: warm, cozy paintings reminded of home, relatives and loved ones… Inside his artistic space there is always a deep personal dialogue between two-three or four characters who communicate very heartily and quietly trying to understand who they are for each other, what place they occupy in everyone’s life. The story of life and its different events, is told in an ordinary and brief way.

Since Mikhail had no artistic education and was not limited to the academic boundaries, his style gravitated towards archaism and simplicity, but at the same time showed him to be an erudite in the field of art history, an expert in early Renaissance painting (and not only) and eternal biblical themes. On the background of abstract distracted landscape loved, grieved, rejoiced, sorrowed, humbled in meekness and fought the inhabitants of its deeply personal space. Reality was combined with surrealism, the variety of figures revealed the artist’s attitude to the subject of the image.

Mikhail possessed both visual and literary erudition and sophistication of the syllable. It so happened that together we made a small text-annotation for the artist Olga Sushkova, who went to the Memorial to America. Misha found such incredibly accurate, elegant and generous words of a kind of admonition for Olga that we all believed – she should be fine, because she is so talented, and Misha is so confident in her …

Of course, the kindness and modesty of the artist Misha Pivovarov’s creative world was an illusion, in which there was a bubbling passion. At the end of 2018 he came to the Museum of Fine Arts to meet the curators of the Moscow Museum of Modern Art, brought his works. He, a famous master, was very eager to know what authoritative, but still strangers think about him. Waiting for his turn, he said that he was organizing a performance, and asked two of his “associates” to hold his painting, cut it in half on the heads of men and women. He performed a symbolic act of separation of his creative “alter ego”, and one picture turned into two separate. For those present, it was a shock, no one wanted to take in the “gift” of these two parts, which had just been a single whole, not even representing the subtext of this gesture, the audience understood – it’s not a joke, it’s – pain…

And six months later Misha Pivovarov’s life ended his earthly journey, and he went to the next world, hopefully the best for him. A man doesn’t need much…